Tails of Hope: The Story of Leo

At HSM, our staff is dedicated to making sure our shelter dogs have a furever ending. 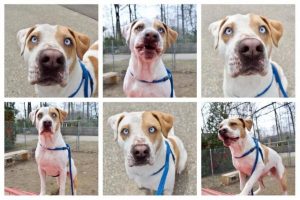 We’re fortunate to be able to share Leo’s successful adoption story.
When we met Leo, animal control had just brought him to our shelter.
He was severely under socialized and highly sensitive to touch in certain areas of his body.
If you’re not sure what under socialized means, it’s more than just socializing with other dogs.
If a dog is under socialized, it means that the dog has not been properly socialized with their surroundings and daily environment.
Under socialized dogs have not been properly introduced to the many stimuli that could scare them and make them fearful: other dogs, kids, other animals, cars, bikes, motorcycles, bells, and anything else that moves or makes noise.
It’s still possible to train under socialized dogs, but it’s not something that happens overnight.
To help Leo learn socialization skills, our staff spent time training him.
After training with us,Leo took part in a dog training program at Teacher’s Pet.
Teacher’s Pet is a program that helps youth learn valuable character traits.
According to their site, “To achieve these goals, the intervention program pairs troubled youth with hard-to-adopt shelter dogs for multi-week workshops.”
Thanks to Leo’s friends, it only took him 3 1/2 months to learn that the world is not such a scary place.
We’re happy to say that Leo gained his socialization skills and successfully completed the dog training program.He was then able to find his furever home and was adopted on April 29, 2018.