Tails of Hope: The Story of Gidget

Two of our goals this year include: providing proper shelter, food, necessary medical care & appropriate training to our animals and placing all adoptable pets into good homes.

Thanks to your support and our staff, we have continued to achieve these goals.

We were able to help another one of our shelter cats find her furever home.

Gidget was 11 weeks old when she was first adopted.

Two years later, Gidget was brought back to us due to behavioral issues.

She was urinating outside of her litter box, but only in the rooms of the children she shared a home with.

One of our veterinarians examined Gidget to make sure there was nothing physically causing her inappropriate urination such as a urinary tract infection or a response to the pain from being declawed.

Since her urination was not caused by any physical problems, we had Gidget spend a week with one of our certified cat trainers.

During this week, it was noted that she did not exhibit the same urination problems. 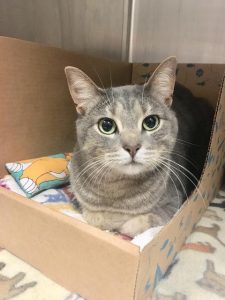 We were able to determine that Gidget’s inappropriate urination was caused from the stress of sharing a home with children.

We believed that if she were given a calm home without children and other pets, she would do perfectly fine.

Gidget was given just that.

We’re happy to say that she remains in her new home and has not had any inappropriate urination problems.