For the month of April, we decided to highlight another special individual as our Humane Hero of the month.

Amy Johnson was nominated as our Humane Hero of the month for April. We decided to highlight Amy because of the impact she and her non-profit organization, Teacher’s Pet: Dogs and Kids Learning Together, has had on at-risk youth and hard-to-adopt shelter animals.

Amy Johnson was born in Florida, but she moved to Michigan when she was around 1-2 years old. She is a Metro Detroit resident and has lived in Michigan most of her life. She has had in interest in animals for as long as she can remember.

Amy is the President and Executive Director of Teacher’s Pet: Dogs and Kids Learning Together. She also currently works at Oakland University full-time where she handles their continuing education for nursing and other areas such as animal assisted therapy. At Oakland, she helps with dog behavior, training and welfare in a variety of populations. Amy also does private practice as a therapist.

How Teacher’s Pet Got Started

As time passed, the director of the pet education center decided she wanted to do some work with kids and dogs. The director thought that with her dog knowledge and Amy’s kid knowledge (she had a teaching degree at the time), they could do something impactful for children and dogs.

Amy then began contacting every group that did anything with cats and dogs around the country and in Canada. She spent a week in Oregon with Project Pooch where she learned a lot about working with adjudicated youth.

She took what she learned from Project Pooch and brought it back with her to determine what she could do to make a similar impact.

“It took us two years of research,” Amy said. “I wanted to make sure it was done correctly.”

Amy contacted district psychologists, superintendents, directors, and anyone else who could provide feedback on how the program would be appealing to them.

In 2005, Amy founded Teacher’s Pet as a non-profit and ran her first program through the organization in 2006.

What Teacher’s Pet Does 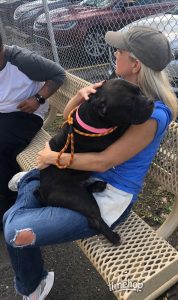 Teacher’s Pet pairs at-risk youth with harder to adopt shelter dogs to benefit both the dog and the youth the dog is paired with. The youth usually work two hours a day, twice a week for a 10-week program.

They are then paired with a dog for five weeks. During the five weeks, they train the dog in a variety of cues in basic obedience.

For example, a youth might be paired with a dog who has under socialization skills to help them become more social, or if the dog is extremely exuberant, the youth will help them to work on being calmer.

“A lot of times, the kids’ own behavioral issues mimic those of the dog,” Amy said. By examining the dog’s behavior, the kids can see their own behavior through the dog and understand that they too may have trouble with socialization or being hyperactive.

At the end of five weeks, the youth are paired with another set of dogs to work with. Then, they get to have a graduation where they do a demonstration of what they and the dogs have learned through the program. They also write letters to the adopters and explain all the wonderful things the dog can now do.

“Our therapeutic purpose is that we want the kids to develop and foster their levels of empathy, perspective taking, and impulsivity,” Amy said. “Those are the things that get them into trouble.”

Amy and her team help youth work on impulse control and empathy building. They also help to minimalize the youth’s externalizing symptoms: not acting out, not feeling the need to be forceful, and refraining from being harsh or mean to get their needs and wants met. They work with at-risk youth to show them the positive way to communicate what they need and want.

Amy wants youth to really understand what empathy means by learning how to relate to the dogs they are helping. She gave this example: “When I’m thinking about my dog at night and I feel sad because he’s in the shelter by himself, that’s what empathy feels like.” This then helps the kids to truly feel what empathy is like, so they can develop it themselves.

When asked about goals she would like to achieve, Amy said, “I would love to see all shelters and dogs who have to spend time in the shelter have a more positive experience. I always think about how hard it must be for the dog to sit in a space all day and stare at the same walls. I think of how I would go crazy.”

She would like to see the shelter become the place that enriches their lives to where the shelter is like home and not a scary place for them to be.

Amy would also like to see more volunteer training. If one trainer can train people and those people can train others, they can all work together to train dogs. With dog training, dogs can learn to develop behaviors that will make them more likely to be adopted and keep them in their homes longer.

“I’m really proud of our staff and our volunteers,” Amy said.

With the help of volunteers and her staff, the Teacher’s Pet program has helped at least 2,500 at-risk youth and 3,600 dogs. Another accomplishment is that some of the youth that participated in the program later became volunteers to help other youth the same way they were helped.

Right now, Amy is hoping to do more programing like the one she has now, have more trainers in the shelters, get more volunteer trainers, and do more research so she can document scientifically that these types of programs work. She would also like to publish journal articles that demonstrate how their efforts work and makes positive changes from a scientific standpoint.