Tails of Hope: The Story of Bumblebee 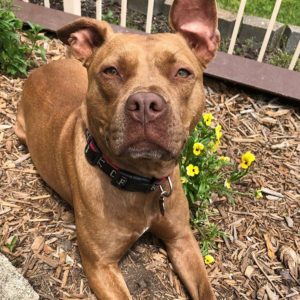 At the Humane Society of Macomb, we strive to help each dog brought to our shelter no matter what condition they’re found in.

When Bumblebee was transferred into our shelter, we realized she was severely underweight and anemic.

We also noticed she was very lethargic and couldn’t stand up or walk.

Our staff quickly assessed her condition and rushed her to emergency.

In our emergency care, we were able to determine the root cause of Bumblebee’s anemia and lethargy.

Our staff diagnosed her with Babesia.

If you don’t know what Babesia is, it’s a disease that is caused by a parasite that attacks and infects a dog’s red blood cells.

Red blood cells are vital in carrying oxygen to a dog’s tissues.

If a dog’s red blood cells are under attack, oxygen is hindered from reaching their tissues. Thus, a dog can then suffer with anemia.

Dogs can contract Babesia through a tick bite if the tick is carrying the infection.

To treat Bumblebee’s Babesia, we had to give her a blood transfusion.

If suffering from Babesia wasn’t enough, Bumblebee was also a victim of dog fighting.

If you’ve never treated dogs who are victims of dog fighting, you can probably only imagine the level of care they need to heal from the fighting.

These dogs are put into a ring and must defend themselves against another dog. The fighting can cause severe and potentially fatal injuries.

Fortunately, Bumblebee didn’t suffer any life-threatening injuries and was able to fully recover from both the fighting and Babesia.

As of today, we’re pleased to say she’s still Babesia free and is doing well in her new furever home.

As we wrote earlier, there are some shocking prescription drugs for pets you didn’t know about.